Future of Sex is supported by our readers. When you buy through links on our site, we may earn an affiliate commission.

What happens when orgasmic pleasure or heroin-like bliss is accessible at the push of a button?

Neuralink, headed by Elon Musk, has recently made a stir with the claim that their products can directly stimulate pleasure centers in the brain.

Neuralink is a company dedicated to creating “Brain Computer Interfaces” (BCI), which are devices that communicate directly with the brain at the synapse level.

In plain speak, they want to put microchips inside people’s skulls.

Last week, Musk unveiled a pig named Gertrude who has a coin-sized chip implanted in its brain. According to the BBC, NeuroLink applied for approval to begin human testing last year.

What is this ‘brain chip?'

In the company's 2019 launch video, Elon Musk refers to BCIs as a “digital superintelligence layer” that mediates communication between the limbic system and the cortex.

The key notion here is that the limbic system, which deals primarily with emotions, is not as “intelligent” as the cortex, which is more concerned with the immediate experience of consciousness, perception, and thought.

He contends that “you already have this layer” in the form of devices like smartphones and laptops, but the key restraint is how well we interface with these products. Ie. The speed bottlenecks of typing, touching, and clicking are what stop us from truly taking advantage of the information revolution. 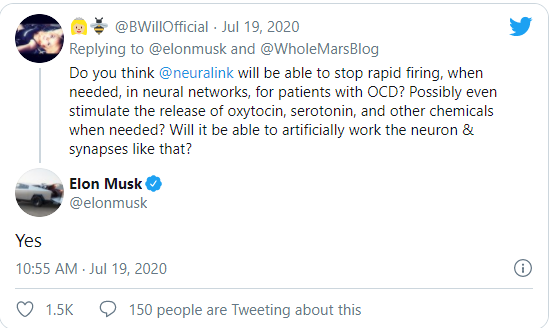 The initial use case for BCIs is aimed at brain-related diseases. Musk claims that conditions like Obsessive Compulsive Disorder (OCD),  amyotrophic lateral sclerosis (ALS), and autism could all potentially be “solved' with a microchip that Neuralink are working on.

Here’s where things get interesting. Connecting directly with the brain is not just about access to information.

It’s about controlling brain signals that release chemicals, and chemicals make us feel things in a VERY direct manner.

If the Neuralink chip can tap directly into sexual pleasure centers, does that mean that all the physical actions and scenarios that we associate with sex, the things that make sex great, can be bypassed altogether?

But the sense of really ‘being there’ is difficult to reproduce. This is why gamers don’t get PTSD, and adult films often leave us dissatisfied. This can be because not all of our senses are engaged by audio-visual media, or because we know that we are not really implicated by what we see on screen; We can close the window whenever we like.

So much about the art of simulation has, until now, been about recreating the sensory conditions that go on to produce mental responses. We perceive virtual worlds like we do the real world – through our senses. It is the combination of sensory inputs that gives us the feeling of being in a situation. Recreating these scenes effectively leads to what we call ‘immersion’. Effective immersion leads to more effective stimulation of pleasure response chemicals in the brain.

The same concept applies to the ‘real’ world. Often we have an idealised version of what a situation will be like in our minds, and then, upon discovery, we find that the actual experience just doesn’t feel the way we thought it would.

The correct recipe of sensory inputs did not produce what our brains demanded for chemical release, and we were disappointed.

But what if the release of these chemicals could be manually triggered?

This is basically the possibility that Neuralink is working on. The Computing revolution has, up until now, allowed us to supplement real bodily experience with a simulated sensory copy.

Now, computing is poised to merge with the body to produce the end products of experience, skipping the event altogether, and working directly on the brain. Neuralinks BCIs propose this next step, whereby the feeling we seek from activity can be triggered directly in the brain.

This doesn’t mean that “doing things’” has to be a thing of the past. At least not yet anyway. The stimulation of pleasure centers could be used to heighten arousal and orgasmic sexual response.

If the pleasure responses of another person could be recorded by a chip, then that same pleasure experience could potentially be rewired into their partner, letting them know what their partner’s sexual pleasure feels like.

Maybe some people like having sex in an environment of risk or tension. These feelings could be overlaid onto a sexual experience, setting the mood so to speak, so that the sexual experience unfolds within a certain mental context.

It should be noted that many people do this kind of thing already with recreational drugs.

Having sex while ‘intoxicated’ is an ancient tradition, but as we know, the chemicals that go in, are not always wholly advantageous for the experience and/or the health effects that we get out.

This leads us on to risks…

Naturally, many people have misgivings about interfacing directly with the human brain. If the chip is connected to the internet, what happens when someone’s chip gets hacked? Would an anonymous individual be able to control your emotions from afar?

Also, who controls all the data that’s coming straight out of someone’s mind, and what could be done with huge amounts of said data? With the revelations of the Cambridge analytica scandal showing how big data can change the results of referendums and national elections, could access to this level of intimate data en mass give private interests a way of controlling people?

The popular science fiction imagination contains many stories of AI eventually enslaving the human race. But Musk claims that Neuralink’s devices are the very things that will protect humans from this eventuation. He says that BCIs are a “Mitigation of the existential threat of AI” in that they give humans near-instant access to information in a way that rivals those of completely automated systems.

There are also potentially harmful and addictive effects that could come from overstimulating pleasure centers.

If people have orgasmic pleasure or heroin-like bliss accessible at the push of a button, will they be able to continue functioning without constantly bombarding their neurons with pleasure chemicals..?

Ben Barnes is an Australian freelance writer. He covers sextech product reviews and the hottest sextech news for Future of Sex.

Ben has two bachelor’s degrees from the University of Technology Sydney in Communications and International Studies. He is fluent in English and Spanish and has a wicked imagination.

His writing also encompasses website content, reviews, articles, essays, and fictional works in long and short form. These have been published in online publications like Seizure, Weekend Notes, and Broadsheet. He also translates between English and Spanish.
Previous Article

A Way Too Brief History of Queer ...

Sign up for our monthly newsletter sharing the very best of the future of sex from our publication and others across the web.